Part 2: Dancing with one who danced with Pavlova 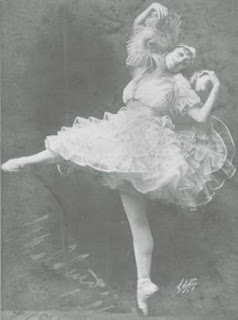 Left: Alexandra Baldina (Kosloff) was a member of the Bolshoi Ballet and later a principal dancer with the Ballets Russes, along with Anna Pavlova and others. Eventually, she came to the United States.

Scroll to the bottom to see a video of Alexandra Baldina and Theodor Kosloff / Koslov performing.

"Cast your bread upon the waters, for you will find it after many days." Ecclesiastes 11:1

Writers knead together assorted words, shape the mass into one form or another, bake it under the heat of scrutiny and revision, and -- sometimes -- release it upon the tides of publication. Most often the words are carried away -- perhaps lost in the vast ocean of words, perhaps run aground on a sandbar somewhere, or perhaps washed up on a remote shore, never to be heard from again.

In 2011, almost eight years ago, I wrote about being part of a long-ago ballet class conducted by Alexandra Baldina, then in her eighties, at a dance studio in Tustin, California. I was not-quite fifteen, growing up in an era of "Hey, Jude," "Born to Be Wild," and "Mrs. Robinson," and I only partially comprehended what an extraordinary opportunity it was.

Baldina had been one of the four principal dancers -- the other three being Anna Pavlova, Vaslav Nijinsky, and Tamara Karsavina -- who first performed Mikhael Fokine's Les Sylphides as part of Sergei Diaghilev's Ballets Russes in 1909, in an era of radical change in art and in world politics.

Miss Irene Wilson, the owner of the Montmarte School of Imperial Russian Ballet where I attended in the late 1960s, had studied under Baldina many years prior, and Baldina had visited her studio on a day my class was scheduled. Quite literally, we were, in that lesson, dancing with one who had danced with Pavlova.

In the process of writing the post about the class, I searched for links to articles about Miss Irene and about Alexandra Baldina and especially for a picture of her. Eventually, I traced one to Susan Tyne, at the time a Grades Examiner for the Royal Academy of Dance, whose grandmother also had been a student of Baldina's. Susan sent me a digital copy of a photo Baldina had given her grandmother, and I included it in the blog post, published on February, 25, 2011.

And that was that. The words floated away, and they never came back.

Until July 2, 2014, that is, when an Anonymous someone left a comment on the post that she, also, had been in that class and had Baldina's signature. I responded and left my email address, but didn't hear anything further until August 2015, when the same person left another message, this time with a name: Paula Hoffman.

Hoffman wrote, "I studied and taught with Miss Irene for years, and I am still using what she taught me all the time. Had a class tonight in fact, and a chat with my teacher after the class about my training and how it intertwines with his teaching. I also had classes with Nana Gollner, also a Kosloff student, and Paul Petroff. Amazing, we were learning the real thing."

Again, I responded, but there was no further reply.

I understood. Email hackers and cyber frauds abound. Neither of us had any assurance the other was legitimately who we claimed to be.

In January 2017, out of the blue, another reader emailed me the link to the video below, which he said had just been posted to YouTube. The video features Baldina and Theodore Kosloff, who later became Baldina's husband during a short-lived marriage, in a joyful pas de deux. This time, I was the one who dropped the ball by neglecting to even thank him for sending it. The email sat there, unacknowledged, until I began writing this post.


This post began just before Thanksgiving 2018 when another woman, Roberta Patton, left a comment saying she had studied with Miss Irene for years and that she thought she remembered Paula. Patton also mentioned she had just been talking with someone about her past ballet experience.

Patton's comment prompted Hoffman to email me directly, as well, and to send the two images included in this post--a picture of students doing center work in the studio and a picture of Alexandra Baldina Kosloff's signature endorsement on the back of the check Hoffman used to pay for the class that day, April 27, 1968.

The cost of a lesson with one who had danced with Pavlova and Nijinsky? $3.50.

The words I wrote in 2011 had floated out into the blogosphere where at least two other people who had occupied that same place and time fifty years ago had read them. The three of us had, in the strength of that memory, reconnected and had celebrated Miss Irene and Madame Baldina. We were older than Miss Irene was at the time of the lesson, though not as old as Baldina. But still we danced, sometimes with our bodies, always in our hearts.

Postscript: In my searching for information about Alexandra Baldina, I also connected with Patricia Kaye Dienhart, adjunct dance faculty at BYU in Rexburg, Idaho. Dienhart's CV says she studied under Baldina from 1962-1971 and toured during that time with the Fremont City Ballet under Baldina's direction. I also discovered that my original post had been linked to a page about Baldina on The Dance History Project of Southern California's web site. I had had no idea.

The best piece of advice
I ever received
about learning
was to start
by reading a children's book
about whatever topic
I wanted to study
because
the language would be simple,
the important points would be obvious,
and
the overall text
would be much more interesting
than a so-called adult book
about the same topic.
Posted by Anne at 2:40 PM No comments:

Beyond Narnia and Middle Earth: The Other Worlds of C. S. Lewis and J. R. R. Tolkien (and friends) 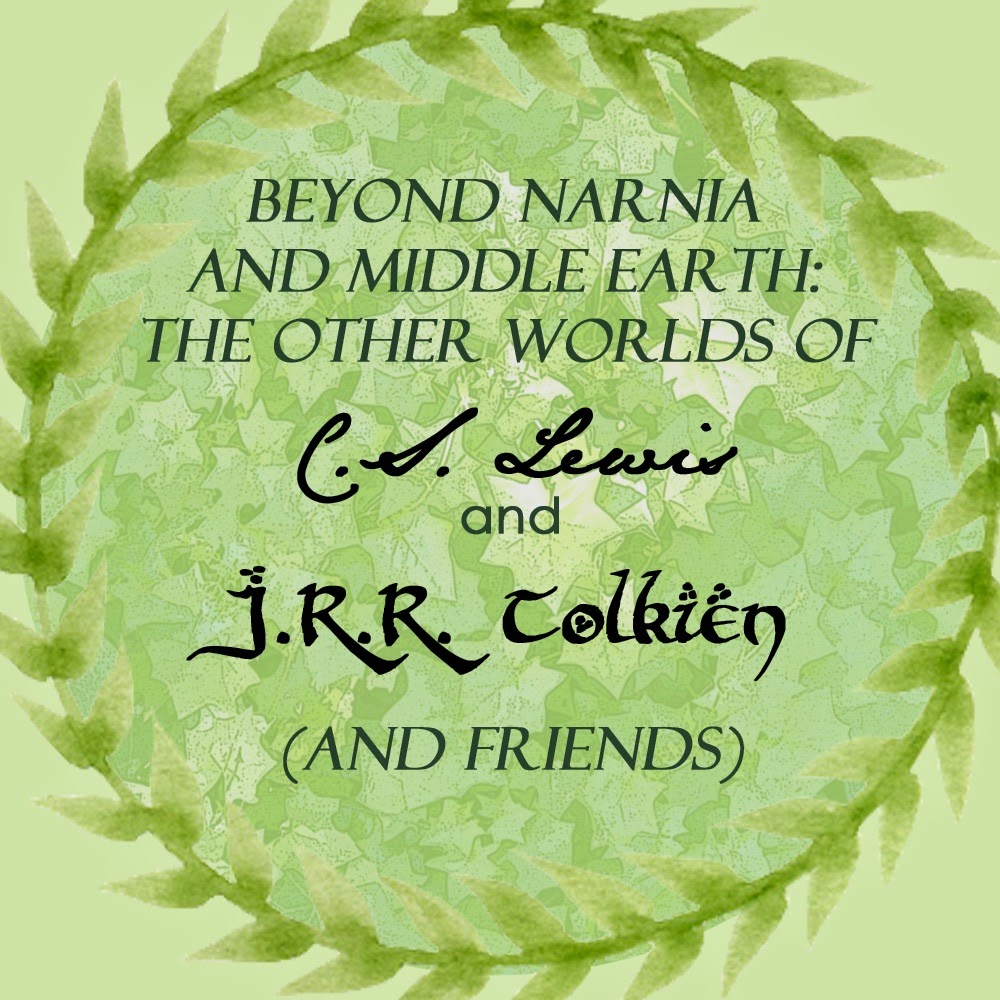 If you have been through the wardrobe with Lucy...

If you have wandered from home with Bilbo...

If you have dwelt, even for a while, in Narnia and/or in Middle Earth...

Then come explore the other worlds of Lewis and Tolkien....

3190 Gulf-to-Bay Blvd., Clearwater, Florida 33759
Free and Open to the Public; an offering will be received to help defray travel expenses. Mr. Hamilton will have books available for sale and will remain to sign books after the sessions.

Suggested readings: Surprised by Joy and Till We Have Faces by Lewis; Leaf by Niggle by Tolkien (not for sale at the event)

Author, editor, and teacher Dan Hamilton  will present biblio-biographical overviews of C. S. Lewis and J. R. R. Tolkien. Between sessions, Rabbi Dr. John Fischer and Dr. Patrice Fischer will lead a panel discussion on the impact of Lewis's and Tolkien's works. Dan will conclude the afternoon with a short discussion of related authors and works.

While Lewis and Tolkien are, perhaps, best known for their high fantasies The Chronicles of Narnia (Lewis) and The Hobbit and Lord of the Rings trilogy (Tolkien), both writers explored other fictional worlds and both struggled to reconcile their created worlds with this real, much more mundane world they inhabited -- and to reconcile both with the realm of the eternal they sensed was just on the other side of the veil.

Dan noted that Lewis, in De Descriptione Temporum, his address upon receiving his professorship at Cambridge, identified himself as one of the last surviving specimens of "old Western Man."

"By that," Dan said, "Lewis meant, in part, a person who was educated (and saturated) in the classics of Western literature and still believed strongly in absolute values and rational thinking."

Dan will explore Lewis's life through a discussion of the books he wrote at various periods. In particular, Dan will focus on Surprised by Joy, Lewis's fairly straightforward recounting of his spiritual life from childhood on, and Till We Have Faces: A Myth Retold.

"Till We have Faces, a reimagining of the mythical story of Psyche and Eros, contains a number of subtler autobiographical elements," Dan explained. "TWHF is a story that Lewis had wrestled with for decades; it didn't finally fall together for him until after meeting Joy Davidman and working on Surprised by Joy and The Four Loves."

"Similarly, the short story "Leaf by Niggle" sheds light on the post-Hobbit period in Tolkien's life when he was beginning to despair that he would live long enough to finish The Lord of the Rings," Dan said.

Over the past 30 years, Dan Hamilton has edited a number of George MacDonald's works, making them more accessible to modern American audiences*. He has lectured on the Inklings and related authors, and with Dr. Ed Brown wrote In Pursuit of C. S. Lewis, which tells the story of the Lewis collection at Taylor University.

Additionally, Dan and his wife, Elizabeth, helped buy, rescue, and preserve The Kilns, C. S. Lewis’ home from 1930 on, where he wrote the Narnia series and many of his other books. Dan co-founded the C. S. Lewis and Friends Society at Taylor University and the Central Indiana C. S. Lewis Society in Indianapolis.

Dan's trilogy, Tales of the Forgotten God (The Beggar King, The Chameleon Lady, and The Everlasting Child) will be joined later this year by The Inn at the End of the World.

Congregation Ohr Chadash is located at the east end of Gulf-to-Bay Blvd. and at the beginning of the approach to the Courtney Campbell Causeway (SR 60). Turn left at the light onto Bayshore Blvd., and the synagogue, which faces Gulf-to-Bay, will be immediately on your left.

For more information about the event, please visit our Facebook page.

*I am indebted to Dan's work as it introduced me to several of MacDonald's children's novels I hadn't known existed. In the early 1980s, I purchased Dan's edited versions of The Wanderings of Clare Skymer, The Boyhood of Ranald Bannerman, and The Genius of Willie MacMichael for our sons. Thirty years later, as I was reading about the British 1870 Education Act, which was the beginning of compulsory public education, I recalled the ideas about education MacDonald had discussed in The Genius of Willie MacMichael or, as MacDonald originally titled it, The History of Gutta-Percha Willie, Working Genius. I realized that MacDonald knew the men involved in proposing and lobbying for the 1870 Education Act -- and that The History of Gutta Percha Willie, Working Genius, most probably was his contribution to the discussion. This became a paper, "Straddling Boundaries: Gutta Percha Willie and the 1870 Education Act," published in North Wind: A Journal of George MacDonald Studies.

'Twas the night before...

...the morning of the beginning of the end of night.
Posted by Anne at 8:48 PM No comments: 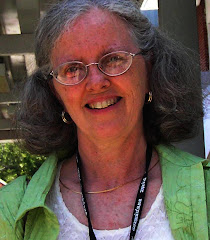 Federal Trade Commission Disclosure: Products and/or services mentioned in Just the Write Touch or linked through it to outside Web pages are not paid product placements, testimonials, or endorsements, unless specifically acknowledged in the posting. For a more detailed explanation of the FTC’s guidelines and my own policies and conflicts of interest, click here.